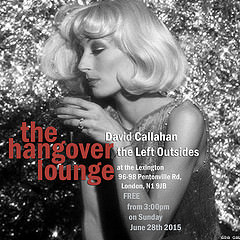 Time for another Sunday afternoon acoustic show, we reckon. This coming Sunday, the 28th of June starting at 3ish and ending at 5ish we will be delighted to welcome both The Left Outsides and Dave Callahan of The Wolfhounds.

The Wolfhounds started up in the early-mid 80s; in a time when it seemed that independent music in the UK was either crunchy or pop (let's not think about the goths), The Wolfhounds were a rare example of an act who won friends and admirers on both "sides". That all seems a bit parochial now, but through the course of an initial run of three LPs the Wolfhounds went further out and became ever more fascinating. After a long hiatus, during which Dave was seen in the marvellous Moonshake amongst many other things. The Wolfhounds reconvened a couple of years back and are just as noisome and downright bloody excellent as ever. In all that time Dave has never played a "solo" show - this will be his first. We're not sure exactly what to expect. History in the making at the Hangover Lounge.

The Left Outsides are Mark Nicholas and Alison Cotton, a husband and wife duo based in London, England whose atmospheric, hypnotic songs echo Nico's icy European folk, pastoral psychedelia and chilly English fields at dawn. Over the course of a few years they've quietly made a series of remarkable records, most recently the uneasily gorgeous LP "The Shape Of Things To Come", which you should think about catching up with if you haven't already. This is a welcome return for them, we're used to being amazed by their too-rare plugged-in full-band shows but my personal favourite TLOs moments have been in the quiet of a Hangover Lounge Sunday afternoon.

Can you tell we're excited? Come and join us on Sunday. Sweet music and idle chatter downstairs from 3-9 as usual. Don't say we're not good to you, even if we're not good for you.
Posted by Tim at Thursday, June 25, 2015 1 comment:

How Does It Feel are presenting 3 ace album launches in one afternoon on August 9:

Haiku Salut - Etch And Etch Deep ("instrumental post-folk that isn't afraid to tear up the rulebook and begin fresh")
Owl & Mouse - Departures ("open-hearted yet delicate songs from the same school of Australian songwriting as The Go-Betweens, The Triffids and Courtney Barnett")
Two White Cranes - Raddison Blue (Roxy's now in Joanna Gruesome; her stripped-down bare bones outsider folk rock is its own special treat)

Doors open at 2pm. The music's finished by 5pm. The Hangover Lounge will be DJing as usual downstairs (roast dinners available) in the afternoon and evening until 9pm.