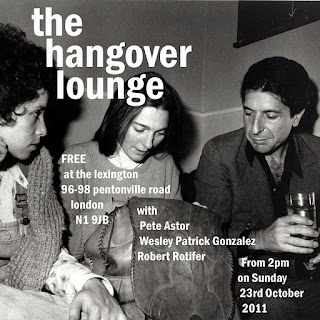 That's right. Are we spoiling you or what.

Pete Astor
Pete Astor, indiepop royalty thanks to his presence in Creation bands The Loft and the Weather Prophets, made a welcome return this summer with his sixth solo album, Songbox.

Literate and melodic, Songbox captures the mood of British folk music in the presence of 60s-influenced pop and is clearly one of Astor’s strongest albums yet.

Wesley Patrick Gonzalez
Wes from Let’s Wrestle makes it a family affair as the man we call Pete Astor, Wes knows as stepdad. After the joyously ramshackle debut album In The Court Of The Wrestling Let’s, this year’s Nursing Home album proved that debut single I Wish I Was In Husker Du was a self-fulfilling prophecy as they went harder and faster towards 80s hardcore heaven.

This acoustic solo show from Wes will show the fantastic Let’s Wrestle songs in a new light. Excited? Fuck yeah!

Robert Rotifer
Writer, musician and radio DJ Robert Rotifer’s sixth album, and first for Edwyn Collins’s new label, was produced by Stiff Records legend Wreckless Eric. The Hosting Couple is a selection of songs about likely subjects such as remote-controlled drones dropping bombs on your hometown, the deceased Austrian sound poet Ernst Jandl, childhood holidays in Essex, and the marine lab in Aberdeen.
Posted by Ben at Monday, October 17, 2011 2 comments:

Possibly the greatest moment in The Hangover Lounge's history happened yesterday. While playing I'm Falling Down by The Raw Herbs, someone came up and asked, "is this The Raw Herbs?" There is probably no other club in the world where a Raw Herbs b-side from 1987 would be recognised. Or played even.

A shame, that, because The Raw Herbs really were a cut above the rest. The tear-in-a-beer Memphis melancholy of I'm Falling Down should be a staple of oldies stations, or at the very least the go-to song for film producers soundtracking moody shots of the guy at the bar.

Someone really should do a Raw Herbs compilation. There was very nearly a two-CD compilation of The Raw Herbs' label, Medium Cool, on Cherry Red four years ago, but the deal was, I understood at the time, not particularly favourable and so fell through.


You can find another track from that session on former Medium Cool boss Andy Wake's blog, along with some very sad news about The Raw Herbs' drummer, Brian Alexis.
Posted by Ben at Monday, October 03, 2011 1 comment:

On October 9th, we'll be delighted to welcome some more live music to the Lounge! This time it's a triple-bill, and as ever it'll start early-ish. PLEASE be there by 3pm to catch the fun. Also as ever, it's all free and all hand-picked for YOU by US.

Harvey's been a favourite musician of mine for knocking on a quarter of a century now, and I'm delighted that he's agreed to a grace us with a rare live appearance. I remember someone once saying that he hits the perfect mid-point of Vic Godard and Victoria Wood. Looks like he'll be guitar-based for this show, so the chances are we won't get to hear this, one of my faves from his last LP:

Rachael's making her own path through the modern young people's folk world, I don't think anyone does it quite like her, and she's quietly made what amounts to a stack of brilliant records. I've seen her play many times and she's never failed to amaze. I can't wait to hear her off-mic.

Jack's a relative new one on me, but I saw his amazing show to launch his recent LP "Copenhagen" at the Slaughtered Lamb a few months back, and immediately started nagging him to come and play. This should give you the idea: