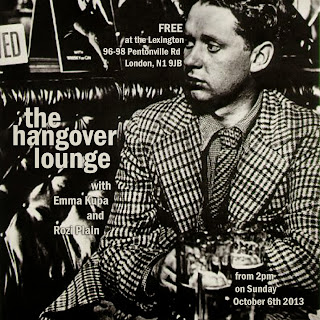 Emma Kupa is a long-time Hangover Lounge favourite. We loved her old band Standard Fare so much that we released (Acoustic) Darth Vader .

We were so excited by her solo career that we saw her first gig in March .
And promptly begged booked her to play at the Lounge as soon as she could. Which is Sunday October 6.

We're equally delighted to welcome back Rozi Plain. You'll surely remember her fantastic When Are You Coming? COME ON! from the second Hangover Lounge 10" EP.

You surely won't have forgotten her Hangover Lounge gig in 2010. If you weren't there, do yourself a favour and come along this time. We start at 2pm, the live music starts at 3pm.

My Love Is Your Love (Forever) by The Isley Brothers

Motown barely bothered with The Isley Brothers. Big mistake. When they returned to their own T-Neck label in 1969 the American public knew what Berry Gordy didn’t – The Isley Brothers' records were so great that they would sell by the million.

My Love Is Your Love (Forever) is the songwriting genius of the young Stevie Wonder (yearning, desperate, pleading innocence) and Ivy Jo Hunter (dramatic master of soaring strings and thumping piano). Motown shelved it. Had this come out in the summer of 67, it would have stayed at number one all summer.

As it was, the Miracles’ inferior version (what are those drums doing? where is the atmosphere?) came out as an album track. When The Isley Brothers were selling millions worldwide, Motown released their version on a Dutch compilation album in 1972. Big mistake. Even then, a single release would’ve seen them number one all summer long.

Now? Any Sunday we play this, it sounds like one of the greatest records ever.

We'll tell you more about this shortly but this is a swift note to say HEY! Get October 6th in your diaries! Live and unamplified as usual in the afternoon we'll be welcoming EMMA KUPA, formerly of Standard Fare, and ROZI PLAIN, continuingly of Rozi Plain. It will be excellent. More soon.
Posted by Tim at Wednesday, September 25, 2013 1 comment: