Deal Two: 10% Discount Card!
From the 1st of July the 10% discount card will be back in action! If you don't have a discount card you need to sign up to the Lexington's mailing list. If you're already on it sign up again at the bar, get your card and use it right away - don't worry you won't get two mail-outs!
Posted by Fire Escape at Wednesday, June 30, 2010 1 comment: 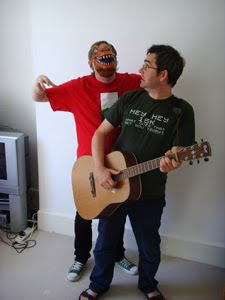 This Sunday, July 4, MJ Hibbett's Dinosaur Planet is back - new and improved - at the Hangover Lounge for a free preview before they conquer Edinburgh Festival. The famously publicity-shy MJ broke his silence to talk about Dinosaur Planet.

THIS year I realised that a way to do a Gigantic Full-Cast Rock Opera would be to get a) a cast b) some costumes. The name of the full-cast is Mr Steven Hewitt, we have bought various HATS and we are ready to ROCK!

(I've also written a batch of new songs, delicately crafted Proper Dialogue, and we've abandoned a cunning scheme to introduce the world's first ever 2D Spectacles to the live theatre. That'll have to wait until another time.)

Hmm. We have never seen this Steve Hewitt in the same photograph as Slipknot bassist Paul Gray. Can you assure our hungover clientele that Mr Gray didn’t fake his own death so he could don a new mask and join you in taking over the world?
I'm PRETTY sure they're not one and the same - Steve is a LOT more rock and roll than any member of Slipknot could HOPE to be - although, now you mention it, he DOES wear a mask in the show. I'll keep an eye on him.

As your worldwide smash Hey Hey 16K might be more popular with computer programmers – men, who don’t know any gurls - is this Hewitt something for all the laydeez in the house?
Absolutely. Last year he patrolled the Royal Mile dressed as a space dinosaur and, as you can see from this video footage, ladies of all genders were soon throwing off their clothes.

Some would say he was just using the disguise as an excuse to go and talk to GURLS. This, of course, would be RIDICULOUS.

We’re trying to improve our SEO. Can you compare your musical extravaganza to the SEX GANG CHILDREN?
We are very much like SEX GANG CHILDREN, not least because most people would have to look us up on Wikipedia (hem hem) to see who on earth we are. Also I believe "Dinosaur Planet" was an early name for Bow Wow Wow, Culture Club, which is a nice coincidence, as well as, of course, Will Young.

I'd like to help out further, but I have a NAKED LESBIAN KYLIE hankering after some FREE DOWNLOADS which is taking up a heckload of time.

It’s theatre sandals again this year. Will you start a trend?
In this new world of Theatre and Musicals I am very MUCH a tourist on brief sabbatical from the sunny uplands of ROCK, so am doing my best to blend in. I'm encouraging Steve to do HIS bit sporting a cravat and indulging in a wave of homosexual affairs, it's the LEAST he can do.

Tender Trap filmed much of the video for their new single Do You Want A Boyfriend? at London's Trendy Hangover LoungeTM. You will see HL hearthrob John "Form An Orderly Queue, Laydeez" Jervis turn down the wanton advances of songstrel Amelia Fletcher from the 15 second mark. To be fair, she probably misread his "Shrag" t-shirt, but you can't blame the girl for trying. She's only human.
Posted by Fire Escape at Tuesday, June 15, 2010 1 comment: 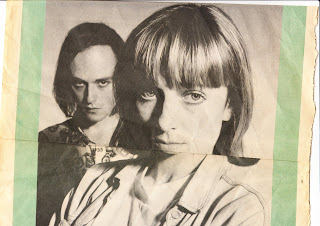 "Driving a Mercedes out of the factory gates, that's what Denim's about."
A little something in anticipation of the Felt fanzine launch tomorrow. From Melody Maker, January 19, 1991.
Posted by Fire Escape at Saturday, June 05, 2010 3 comments: