Darondo drove a white Rolls Royce Silver Cloud, was a California property magnate and lived well. He also made some fantastic records. His 1974 single I'm Gonna Love You still sounds fresh out of the box. It's got Al Green's soft punch, The Isley Brothers' strut, The O'Jays' jubilance and Marvin's swagger.
The Listen To My Song collection has got more like that, you know:

Sunday March 18. The Hangover Lounge starts at 2pm, the live music from about 3pm. 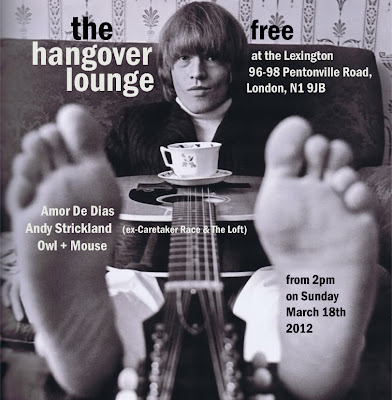 Amor de Días (Spanish for “love of days”) the secret supergroup formed by Alasdair MacLean of The Clientele and Lupe Núñez-Fernández of Pipas, are playing a special free gig before they head off on a European tour with The Magnetic Fields.
Andy Strickland, once of Creation Records legends The Loft and fondly remembered indie band The Caretaker Race, is making his solo debut 21 years after The Caretaker Race split. Andy has written a couple of new songs for the occasion. And he'll be joined by Caretaker Race bandmate Andy Deevey on guitar. You've got to come along.
Owl + Mouse is the project of London-based singer/songwriter Hannah Botting. Soon after moving to London from Australia in 2008 she bought a cheap ukulele and taught herself to play by learning as many Magnetic Fields songs as she could. Hannah’s own songs are spare, haunting and richly imaginative.
Posted by Ben at Tuesday, March 13, 2012 1 comment:

On Sunday, March 18, we're delighted to welcome Frances and John from Clay Pipe Music as our guest DJs.
They'll be playing soothing songs in the afternoon as well as bringing "units" from their fine catalogue - all hand-crafted and very special - to meet the purchasing requirements of the discerning shopper.
Posted by Ben at Wednesday, March 07, 2012 1 comment: