Coming up this Sunday, we not only have a guest DJ set from the excellent Colm McCrory of Help Stamp Out Loneliness / Language of Flowers fame, but we're planning another of our board game afternoons, this time hosted by the lovely Karren from the Stolen Wine Social.

We are particularly excited at the prospect of getting stuck into a recent charity shop board game find: HYPE! 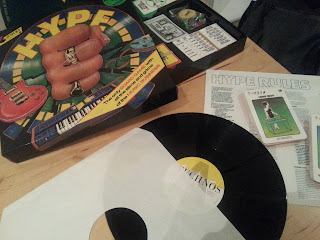 On the box it says "HYPE: The Only Boardgame with all the slime and grime of the Music Industry" (1983)".

Obviously, our experience with the HLEPs has made us experts on the music industry, but the rules were probably different in 1983. The game comes with it's own 12 inch single, which we promise not to play on Sunday. See you there, we hope.
Posted by Tim at Monday, September 24, 2012 1 comment:

Ahead of Making Marks' first UK tour [FEATURINNG AN UNMISSABLE ACOUSTIC PERFORMANCE AT LONDON'S TRENDY HANGOVER LOUNGE THIS SUNDAY 16 SEPTEMBER AT 3PM) in preparation for their debut 7" single due in October, Fika Recordings has released the video for Ticket Machine. It features the four-piece performing at an Oslo bus stop, waiting for their regular 07:38 bus to work in the morning, delicately intertwined with archive footage from the 1946 informational short film, The Bus Driver, exploring the tension between optimism and realism.
Lead singer Ola Innset explains more: "The song is kind of dark. About as dark as an Oslo street in January, windy and cold, full of people waiting for the 07.38 bus to take them to work. A lot of people both lonely and nervous, who do their best - go to work and do all the things they're told to do. And we could have something better, maybe, but even hoping for it costs a lot, because it can be quite painful to hope for something better when it seems so inprobable that you'll get it, so somehow it's almost better not to hope, and just do your best and try to be content with the shit card life has dealt you. I guess this could be both on a personal level, as a hope for a more meaningful life, and on a more collective level as a hope for a less idiotic and unfair way of organizing society. And then there's a tiny love story in there, that didn't go well, and a middle 8 (is that what it's called) implying that we're so used to darkness/shit/misery/capitalism that anything else would seem so strange that we might not even be able to like it, the light would be to bright or something."
Posted by Ben at Thursday, September 13, 2012 1 comment: 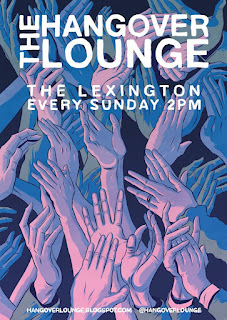 Artist and graphic designer Tom Humberstone, who created this wonderful poster for us, is having a sketch sale. He's got some time on his hands so is "offering everyone with access to the internet and £30 the opportunity to commission me to draw them a sketch…
"The drawing will be produced in a one or two hour period using Indian ink on Bristol board. Black and white. And then posted at no extra cost. I’ll also scan and clean up the drawing so I can email a digital file of the image as well. The more complicated and ambitious concepts will most likely take longer and thus I’ll have to charge a little extra – but no more than £20. I will also do a one/two tone colour version of the digital image for those who would like it and are happy to pay an extra £10."
Yes, Team Hangover Lounge has put in an order. We'd have been fools not to.
Read all about it and see some of Tom's art
Posted by Ben at Monday, September 10, 2012 1 comment: