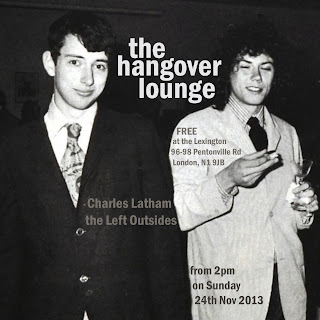 Charles Latham is the star of our split 7" picture disc with Withered Hand. On Sunday November 24 he's joining us with Ellie Brooks, who sang on Hard On.

You might know Withered Hand's brilliant cover. What it misses is Ellie's vocals. Charles says:

I don't think anyone's been able to recapture my friend Ellie Brooks' second vocal. She came up with the part while singing along when I played the song at a friend's house in Brighton shortly after having written it. I used to spend most evenings at the flat of my friends Jimmy and Eleanor, who were at the time a duo (now a full band) called The Bobby McGees. They were and still are my favorite band. Anyway, I would go to their flat and we'd take turns sharing songs. Ellie was living with them at the time, and she was sitting around with us and started singing along with the tune. I'd either brought my recording machine or brought it the next time, and we sang it a couple more times and just went upstairs and recorded it. The noise at the beginning is a false start because the phone started ringing.

We've been asking The Left Outsides to play for the past 4 years. Good things come to those who wait.