Charles Latham, who co-stars with Withered Hand on our new split picture disc, recorded a session for Song, by Toad. It features 4 old favourites, all sounding ace, and there's an interview, too.

Try this for starters and then go and watch all the others over on Song, by Toad.

We're looking forward to meeting the Song, by Toad folk this Saturday at the Independent Label Market, where you can buy the picture disc. 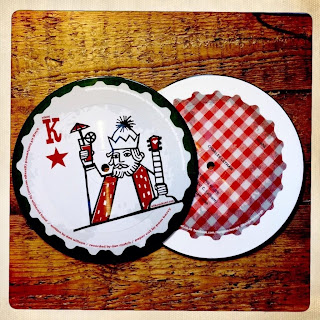 We're getting the brand new Withered Hand and Charles Latham picture disc from the pressing plant this week. You can be among the first to have a copy if you come to the Independent Label Market this Saturday 13 July at Spitalfields Market.

Not only that, but there are special wooden badges designed and made by Pam Berry. 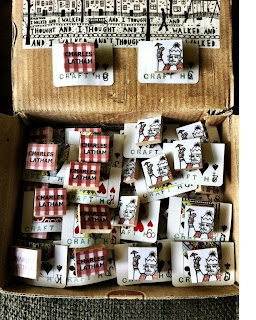 Hacia Dos Veranos' Limay album will be for sale, too. You need this record:

We're sharing a stall with Fika (who've just released the Bugbears album by Darren Hayman and the Short Parliament), OddBox (the Tyrannosaurus Dead EP is onee of the year's most exciting releases) and Darren Hayman himself, who's painted some test pressings especially for the occasion.
Posted by Ben at Monday, July 08, 2013 1 comment:


Stepping out with a new band, and joined by Pam Berry of seminal DC noisepopsters Black Tambourine, Withered Hand return to the fray with 'King Of Hollywood', a storming statement of intent from Edinburgh's DIY urban worriers.

“I fell asleep watching a buzz band, I peeked out under my hood, some of the people there were losing their shit, please let me be misunderstood.”

'King of Hollywood' is a true garage version of a song that will feature on Withered Hand’s second album in more polished form, due for release in early 2014.

Tennessee’s Charles Latham has been self-releasing music digitally for 10+ years. “Hard On”, from Latham’s first full-length album, 2006’s “Pretty Mouth”, has been covered by many artists, including Withered Hand. “Next To Nothing Blues” is the first of his songs to appear on vinyl, a split 7” picture disc with, yes, Withered Hand.

“Next To Nothing Blues” is a 2:45-in-the-morning tune, aching with bittersweet late-summer malaise. It could be a cut from the musical version of a John Cheever novella set at a formerly grand country estate in the early 1970s, the score co-written by Ray Davies, Rufus Wainwright and the ghosts of Elliott Smith and Vic Chestnutt, performed by an Appalachian chamber quartet.

Want! How can I buy this record?
Mail order from the bandcamp, or direct from either of the artists, or from a few record shops and mail order outlets. We're sorting that out now.