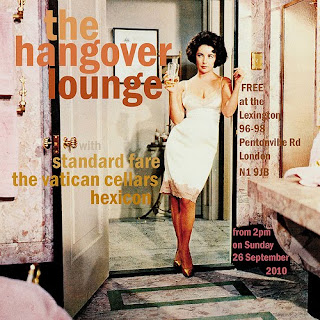 Anyone who's ever thought, "Actually, Your Woman is a song about a woman dumping a man from a woman's point of view. I'd love to hear a woman sing it with Jyoti playing guitar," is about to get lucky. Anyone who's ever thought all that and "but what would make it absolutely perfect would be if Elizabeth out of Allo Darlin' sang it" can rip up the calendar and call today Christmas because we filmed that exact scenario during rehearsal for the recent Hangover Lounge gig.

Our friend Mike Jones held the camera steady and got the lights just right, for which we're very grateful. So much so that we bought him half a pint of bitter. It was literally the least we could do. Cheers, Mike!
Posted by Fire Escape at Friday, September 17, 2010 2 comments:

"My version wouldn't be married to Nicole Kidman."

Before Elizabeth's solo show in support of the Hangover Lounge ep featuring the wondrous Tallulah, we asked her ten Go-Betweens-related questions. Fans of hard-hitting investigative journalism should probably look elsewhere; those of you who want to know who Elizabeth would recruit to form tribute band The Australian Go-Betweens have come to the right place.