I'm not sure who filmed these but thanks - they're terrific!

Not only that but also a delightful photo of Darren here on flickr!
Posted by Tim at Monday, January 31, 2011 2 comments:

Hayman's Song 30, live at the Lounge

... And so it came to pass! Darren's 30th song of his month of songs. Not only live at the Hangover Lounge, also featuring the crowd. Here it is!

Thanks to Darren, Jack Hayter, World of Fox and the Man Who Loves you for a tremendous afternoon of live songs!
Posted by Tim at Monday, January 31, 2011 1 comment:

I note with some sadness that I've failed to put an advertisement for a live show up on this here blog. I'm sure most of you get your information about this kind of stuff from Facebook or similar (and if not, may I recommend that you sign up for our Facebook group, details over there somewhere) but ANYWAY this Sunday we'll be delighted to present another afternoon of live and unamplified music for your delectation, look: 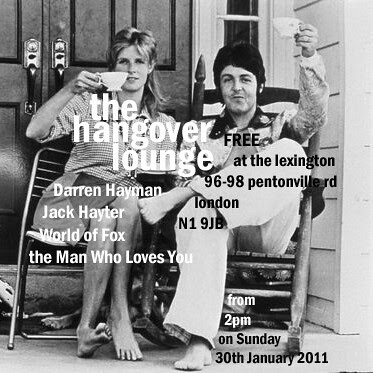 That means:
1. Darren Hayman, now nearing the end of his amazing January Songs project (that's a song written, recorded and released every day this month, and rumour has it he'll be performing and recording Sunday's song live at the Lounge).
2. Jack Hayter, an old mucker of Darren's from Hefner days and beyond, who's recently released an EP of solo material.
3. World Of Fox, whose LP of '80s covers was the very first release of 2011: this is your chance to get your hands on the super-limited deluxe edition of that record, "Respect", which is one of the most beautiful editions of a CD I've ever seen.
4. The Man Who Loves You, fresh from Plymouth with the folk stylings!

All for free, unamplified, upstairs at the Lounge, Sunday afternoon. The usual business will be going on downstairs if the live rockin's too hard for you. We understand.
Posted by Tim at Friday, January 28, 2011 1 comment:

Peter Momtchiloff, one of the UK's premier practitioners of the electrical guitar, whose talents have graced and indeed continue to augment popular beat combos informed by indiepop, folk, garage rock and easy listening, is DJing for us this Sunday (9 January).

The last time Peter - or Monty to his inner circle - DJed at the Hangover Lounge he wore a tie especially for the occasion. Monty, we salute your sartorial elegance.
Posted by Fire Escape at Friday, January 07, 2011 1 comment: