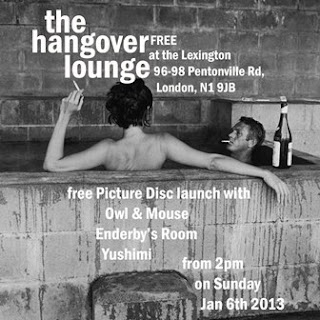 This Sunday we're giving away a picture disc. On one side there's the massively influential US indie legends Black Tambourine covering the much-loved Ramones classic "I Want You Around" (from BT's recent OneTwoThreeFour" double EP of Ramones covers) dubbed into submission by our good friend DJ Downfall. It's the first official remix of a Black Tambourine track ever, and we are very happy to have commissioned it, and proud to be releasing it.

On the other side we're delighted to present the first vinyl release by the excellent Owl & Mouse. If you pay attention to the Hangover Lounge then you know all about them, but they are attracting a lot of attention in the wider world at the moment, and it's well deserved. "Canvas Bags" was produced by Darren Hayman and sounds like a million dreamy bucks.

To mark the Hangover Lounge's first 7", we've got Pam Berry of Black Tambourine DJing and we've got Owl & Mouse playing a free gig.

Not just that, but there's also Enderby's Room, a project of Dan Mayfield who you may have noticed playing with Darren Hayman at Hangover Lounges in the past, playing a rare gig and Yushimi, who share some personnel and some style with our Argentine heroes and muses Hacia dos Veranos.

To whet your appetite, have a gander at Yushimi's I got trapped in a waiting room with my head against a Turner. The song is every bit as intriguing and seductive as the title suggests.

We open our doors at 2pm. The live music starts at 3pm sharp. See you there.

Coming Down in January

New Year, new danger, same old hangover. We're all going to be feeling a bit sorry for ourselves. We have therefore done what we can to line up a dirty great humdinger of a January for you. YOU! Isn't that nice?

JANUARY 6th: LAUNCH PARTY! LAUNCH PARTY! We'll be launching our giveaway picture disc, which I told you all about in the post-before-last in this blog. Come along and ask for a copy of the record, featuring Black Tambourine in dub AND newly minted stars of 6Music Owl & Mouse. Guest DJ set from none other than Pam Berry herself, AND AND AND live music upstairs featuring the aforementioned Owl & Mouse, plus rare sets from Enderby's Room, a project of Dan Mayfield who you may have noticed paying with Darren Hayman when Darren played with us PLUS PLUS PLUS Yushimi, who share some personnel and some style with our Argentine heroes and muses Hacia dos Veranos. We're going to be going on a lot more about HdV over the next month or two so watch out. This is going to be a very special day!

JANUARY 13th: we'll be enjoying a guest DJ set from our chum (and yours) sound man and sound man Mike Winship. Mike always plays a blinder.

It's beginning to look a lot like GREAT STUFF TO BUY

Christmas presents, you say? All sorted? No? NO??

Here are some ideas for you.

1) Buy the beloved who has everything a copy of the new CHICKFACTOR. It's great, and the chance to buy a brand new Chickfactor after all these years shouldn't be missed. What's more the excellent Gaylord Fields has written this about the third Hangover Lounge EP:

if you live in or near london and you don't frequent the hangover lounge at the lexington on any given sunday, i hate you. even if you do, i still hate you, for a different reason, that being that I don't live anywhere near london. my emnity fades when I'm playing the six acoustic-insistent songs by artists who have graced that stage. the honor roll for hangover lounge compilation number three comprises standard fare (six strings and gentle persuasion); nat johnson and the figurines (catty and country pretty); would-be-goods (sultry and supper-club soulful); rachael dadd (heart-massaging folkiness without a grain of corn; louis philippe (domesticating a pet sounds classic; and fox (courting you slowly, like a good swain should). upon further listening, I've changed my mind. i love you all."

Thanks, Gaylord! We love you too.

2) Buy yourself a copy of HLEP3, as reviewed above by Gaylord Fields. We still have some of these left and they are bleddy brilliant, honest. HLEP1 has gone now, I'm afraid, and we are having trouble finding the few copies of HLEP2 which we thought we had left. So grab HLEP3 while you can. To you, a fiver.

3) If you or your loved one is desperate for copies of HLEPs 1 & 2 then we still have a small handful of the HANGOVER LOUNGE: THE THREE EPs box sets available. I can see them from where I'm sitting. There are four of them. £20 and worth every handprinted penny.
Posted by Tim at Tuesday, December 11, 2012 3 comments:

Coming Down In (what's left of) December

I know, I know, I'm supposed to o this before the month starts, but I was DRUNK and so were you, most likely. I hope so. Here's what we have coming along for your delectation for the rest of this month.

DECEMBER THE SIXTEENTH: double header on the guests today: you can enjoy the sweet sounds selected by David Arnold, who has taken on guitar duties with mod pop heroes THE CLAIM and THE JASMINE MINKS amongst others. Not only that but HEY! Remember the glory days of Track and Field? Ben sitting in the main bar of the Betsey sinking bottles of wine, while all around the KIDS of various ages were getting on with the kind of upstairs downstairs we can get behind? Yes? No? It doesn't really matter because Paul from T&F will be playing records with us and it will be GREAT. Not only that but he will be giving out a limited number of his legendary Xmas CDs to early arrivers. That is to ay, people who arrive soon after he arrives. When will he arrive? Who knows? It's a giant puzzle, like the Guardian giant cryptic crossword but sounding better.

DECEMBER THE TWENTY THIRD: admit to yourself that you're going to be buying some last minute Xmas presents, and then admit to yourself that once you're done with all that you fancy kicking back with some booze and hanging out with us. Mike Andrews used to run one of our favourite ever record shops and has developed an exquisite taste in music, which he will be sharing to ease your path to pre-Xmas relaxation. Mmmmm.

DECEMBER THE THIRTIETH: we'll be getting into practice for the big one the night after with the perennial treat of Harvey Williams playing records from his meticulously-assembled collection. It's likely to be smooooth and we are looking forward to it enormously. We love HArvey and we love his DJ sets.

Since it's now been on real actual 6Music, it's probably time to tell you - wth some pride - about Hangover Lounge Records HL004, due out in January. It's a split single featuring Black Tambourine and Owl & Mouse, and it's free! A RECORD YOU CAN'T BUY
It's not just a split single, not just our first 7" release, it's also the Hangover Lounge's first picture disc record - and it's not for sale. We've made this to the highest production values we can come up with, and we are giving it away. We think it's brilliant.

Just in case you weren't sure, the Hangover Lounge happens every Sunday afternoon at The Lexington on London's attractive Pentonville Road, and anyone who wants a copy of the record just has to come along - it's free to get in - and ask for a copy.

WHAT'S ON THE RECORD?
One side - we have massively influential US indie legends Black Tambourine covering the much-loved Ramones classic "I Want You Around" (from BT's recent OneTwoThreeFour" double EP of Ramones covers) dubbed into submission by our good friend DJ Downfall. It's the first official remix of a Black Tambourine track ever, and we are very happy to have commissioned it, and proud to be releasing it.

Other side - hot off the press we are delighted to present the first vinyl release by the excellent Owl &Mouse. If you pay attention to the Hangover Lounge then you know all about them, but they are attracting a lot of attention in the wider world at the moment, and it's well deserved. "Canvas Bags" was produced by Darren Hayman and sounds like a million dreamy bucks.

HOW DO PEOPLE GET THIS THING AGAIN?
We're having a launch party on January 6th at The Lexington, with a handful of live-and-unamplified bands including Owl & Mouse playing upstairs, and the legendary Pam Berry from Black Tambourine DJing downstairs. The record will be available for nothing that day, and every Sunday after that until copies run out. You just have to come to the DJ booth and ask for a copy. That's it.

WHAT WAS THAT ABOUT THE RADIO?
Steve Lamacq played "Canvas Bags" on Friday, and you can hear it after 11 minutes or so here.  It sounds fab on the radio!
Posted by Tim at Sunday, December 09, 2012 2 comments: