He came, he played some tunes and we all relaxed. These, people, were good times, and Pete made a list of 12 choice tunes from a flawless set. If you weren't there, Pete will be coming back for another stint. Any week he likes. 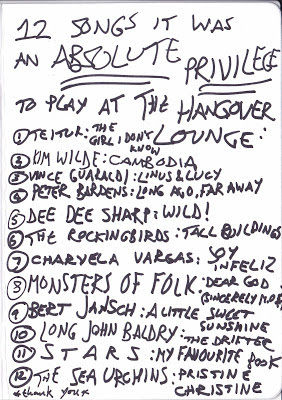 For your convenience, have a listen to two of them now. Here's Monsters of Folk - Dear God (Sincerely M.o.F.):

And here's Kim Wilde being sultry about Cambodia: 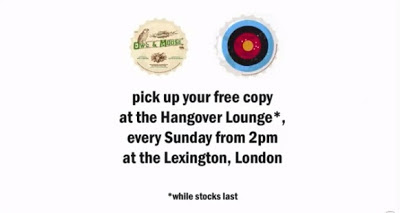 Come and grab your Owl & Mouse picture disc also featuring Black Tambourine's I Want You Around given the dub treatment by DJ Downfall.

Dan's back in London next week ahead of his DJ set at Scared To Dance for more practising. No melodica solos will be missed come the Union Chapel gig.

I filmed the first song. At least I thought I did, but it turns out I screwed up and . I had rather considerately pointed the camera at an angle that would have allowed you, dear readers, to hear the music over Dan's trousers.

Dan will be spinning the wheel of golfing slacks in his costume department next month. I only hope that last week wasn't a dress rehearsal. We don't know what to expect sartorially, but the gig is going to be even better than last week's quiet triumph.
Posted by Ben at Monday, January 14, 2013 3 comments: 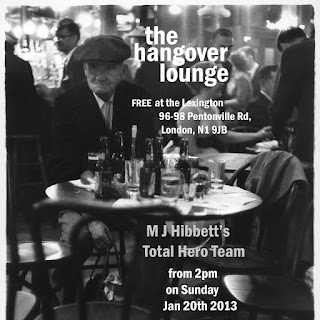 We’re delighted to welcome back Mark “MJ” Hibbett and Steve “Steve” Hewitt to the Lounge for their latest musical extravaganza.

The boys (or “two drunken dads picking up a guitar at a party!" as Radio 1 described them) have previously performed their acclaimed musicals Dinosaur Planet and Moon Horse Vs The Mars Men Of Jupiter at the Lounge.

We interviewed Mark the first time and Steve the second time. Using the award-winning low-brow editorial skills which have made this blog quite readable sometimes, this time around we got them to interview each other.

Yes, Mark found time in his busy schedule of Googling himself and Steve took a break from listening to his Day V Lately records to think really hard about stuff.

Hello Steve! Between our last show, Moon Horse, and this one, you worked on a slightly different project in East London. How does being part of "Total Hero Team" compare to being in The Olympic Opening Ceremony? And did Danny Boyle ever get you a beer?

Obviously, there's no comparison, what could possibly compare with getting a train to Stockton to play to ten people on a Sunday night then having to (attempt to) sleep on me mam's sofa because "the talent" got the proper spare bed...having said that it was AMAZING being in the Olympics of course but it all seems like a bit of a dream now...

Have you ever read any Superhero Comics, and if so a) what b) did you like them?

when i was a kid yeah, you know, what with comics being for kids and everything. The early 80s UK Marvel reprints that came on newsprint (like proper comics) were the main thing I read, Daredevil and Black Panther and the occasional treat of a Proper American Comic (often "Dial H for Hero" for some reason? or Groo...). I liked them, but never really got into it that much as it was hard to get a decent run of the same comic in a small village...

We've done Dinosaurs, Space Adventure and now Superheroes - what mountains are there left to climb?

Mountain climbers? Still a bit low on ninjas (and obviously we have the skills and physiques to pull that off immaculately), there's yr horror tropes, western gunfighters, restaging the entire mahabharata, in 55 minutes, just the two of us, ALL SORTS! The fun need NEVER END...

You have often professed a desire to use these shows as a springboard into a career in international glamour and fame - how's that going? Have Strictly called yet?

I can exclusively reveal that I shall be replacing Brucie from next season...

AND FINALLY: Apart from the regular access to curries, what are you most looking forward to in this new run of shows?

I'm looking forward to remembering it all and being match fit enough to get through it without feeling like i've been in a tumble dryer for an hour... also there's some cracking new pubs opened in Edinburgh since we were last there!

Hello Mark! What have you learned at SCHOOL FOR DRAMATURGS that you've brought to this year's show?

I have mainly learned that what we do ISN'T technically called "Two Middle-Aged Men Titting About" but is actually EPIC THEATRE in THE BRECHTIAN STYLE! It's a proper thing! As we speak I am waiting for THE ARTS to get in touch and hire us to show them how to do it.

Who is your favourite superhero (NB this has to be a definitive answer and you can only pick one ;))

I have a massive soft spot for Captain Britain, due to growing up with the AMAZING Alan Moore/Alan Davis stories in the aforesaid Proper Black & White Comics, and will thus, sadly, buy any comic the character appears in, however awful it is. My all-time favourite superhero though is THE THING, as he is totally brilliant but also SAD, and has the BEST catchphrases.

What did you do in our year off?

Apart from crying all the time, you mean? I spent most of the time hawking "Dinosar Planet", the album based on our very first rock opera, around various unusual niches of the media. I may not have got it into the NME, but we did have features in The Smithsonian Magazine and The Teacher. Beat THAT, Liam Gallagher!

When are you going to get internationally famous and take me along with you? eh? eh? What am I meant to do, have some sort of talent of my own???

What are you talking about? Someone asked you for your autograph last year, that IS being Internationally Famous! What more do you need?!?

AND FINALLY: Apart from the regular access to curries, what are you most looking forward to in this new run of shows?

Getting the gigs booked, the flat sorted out for Edinburgh, the posters and flyers printed and the admin DONE, then I can concentrate on these Exciting New Pubs you speak of!

We have FREE PICTURE DISCS. Just come to the DJ booth and ask for one. We'll have 20 copies to give away this week and every week until we run out. NO IT DOES NOT COME WITH A DOWNLOAD CODE, MRS UNGRATEFUL. If you don't have a record player, just nail it to your wall. It's a great-looking artefact.

The Hangover Lounge opens at 2pm. Total Hero Team will start at 3pm.
Posted by Ben at Thursday, January 10, 2013 1 comment: 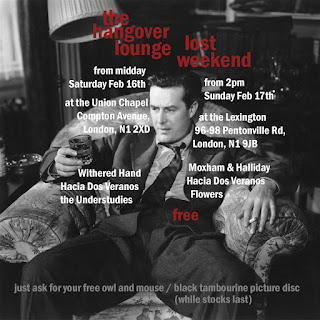 The Lost Weekend - two days of free gigs and indulging in sensual pleasures - is back on February 16 and 17.
Starting at 12pm on Saturday February 16 at the Union Chapel, we bring you an exclusive Withered Hand performance featuring the first lady of indiepop, Miss Pam Berry. This is their first gig together and it's going to be a belter.
Hacia Dos Veranos are launching their third album Limay ("they play many, many beautiful chords and for that I love them," says no less an authority than The Clientele's Alasdair Maclean). This will be a full-on electric set featuring psychedelic madness crashing into pop music's rich majesty. Forever Changes meets Bryter Layter, if you will.
The Understudies have kindly agreed to polish their brogues, press their waistcoats and bring their infectious mix of girl group hooks and Smiths-style grainy grandeur. Their wonderful video for Erika K tells you what to expect:

The Union Chapel gig finishes by 2.30pm, at which time we'll be going to the pub. See off your hangover in style on Sunday February 17 at the Lexington, where the Hangover Lounge starts at 2pm.
The live music starts upstairs at 3pm sharp.
First up is Flowers, formed out of the ashes of the far-too-short-lived The Notes. Want some reference points? OK. How about if The Sundays broke up a fight between The Cocteau Twins and The Mary Chain? Listen to this:
Saturday stage times: 12pm Understudies; 12.40 Hacia Dos Veranos; 1.20 Withered Hand
Hacia Dos Veranos are back, this time for a beguiling trip through the acoustic byways of Limay, featuring added violin. Did we mention that you can buy Limay now? No? Well you can.
Ladies and gentleman, the legend that is Mr Stuart Moxham! Yes, you heard right. Stuart will be playing with Derek Halliday as Moxham & Halliday, splitting a 45- minute set about 60% solo and 40% M&H.