Coming down in June!

May may have divided itself into two distinct sections, weather wise, but the Hangover Lounge was pretty much 100% steady-state painful FUN. Well done everybody, especially those who turned out at short notice to see the Wave Pictures and Allo Darlin' be amazing on the hottest day of the year. Onwards, though, and downwards, it's time to look forward to a flaming June of Hangover Lounges, each perfectly-conceived in its own way.

June 3rd: starting as we mean to go on, at the top o'the shop! We're welcoming our chums from Ellis Island Sound as guest DJs. We know that that could mean anything up to about 1500 different individuals but in this instance we're talking about exercising the exquisite taste of David Sheppard and Peter Astor who between them have a list of musical achievements so long that I'm not going to insult you by listing them here.
June 10th: two guests today - our good pal and Lounge regular Peter "J" Miller, enemy of the stars, will be laying down a set of great stuff before he wends his way out of the country for a bit. Also we're welcoming Robin Turner, who probably knows as much about drinking as the four HL regulars put together (NB this is an Olympian achievement), having recently published his second book about pubs. He's also part of the much-loved Caught By The River, AND a co-conspirator in the world of Heavenly Records. WHAT'S MORE he's a total gent. I once heard him DJ a load of birdsong. There's no doubt that this will be an interesting musical afternoon, albeit at a low volume.

June 17th - In this little heatwave, it's pleasant to remember those chilly, Januarial times when we had that awesome Saturday afternoon at the Union Chapel with Birdie, the Would-be-goods and David Tattersall. Wasn't that amazing? The mastermind behind those Saturday specials, and member of The Arctic Circle, Ben Eshmade will be our guest DJ. What a delightful fellow. And there's one of those excellent Wills-Moody Jumble Sales taking place upstairs.

June 24th - Monster Bobby's coming to DJ. MONSTER BOBBY! He's an indie svengali, you know, and we are always dead impressed by anyone who'll come up with the kind of schemes which saw him bring a bleddy orchestra to the Hangover Lounge last time he visited us. We don't really know what he's going to play but we're looking forward to it anyway.

And that's it, June in a nutshell. I know it's not june but it's worth noting that on July the 1st we are putting on our first ever grown-up evening show on the Sunday evening: we're welcoming The Lobster Boat Band (David Tattersall and Howard Hughes, who the eagle-eyed may have spotted contributing to out 2nd EP, few copies still available etc etc) and I'm willing to bet there'll be some pre-Indietracks shenanigans happening that day as well.

The music and spirit of Grant McLennan were remembered in fine style on 6 May. David Westlake, whose band The Servants supported The Go-Betweens in 1986, remained a lifelong friend of McLennan.
This was David’s first gig in 11 years. It was an estimable return. If after watching David’s stylish take on Casanova’s Last Words your first thought is “great syncopation” it won’t surprise you to learn that David is a university poetry lecturer.

Queensland Station is a supergroup numbering from left to right David Sheppard, Pete Astor, Ben Phillipson and Phil King. Firstly, you see them in rehearsal:

Secondly, you see them in performance:

Both David Westlake and Pete Astor reminisced about the time they’d spent with Grant and what they’d learned from him as friends and songwriters. It was an afternoon of great music and warm memories. Did anyone say love goes on? It does.
This Sunday, 3 June, we're delighted to welcome back the Queensland Station's Pete Astor and David Sheppard as our guest DJs.
Posted by Ben at Tuesday, May 29, 2012 1 comment:

In honour of the Independent Label Market which will be held at Spitalfields Market this Saturday (19th May), we have created a special box set of the three Hangover Lounge EPs. It's super-limited, there are 25 of these in the world, of which 20 will be on sale on the day. The other 5, we're keeping.

Here's how it looks:

1. The box itself is a 10" cardboard box with a handprinted postcard, like so: 2. Open up the box and here's what you'll find: PLUS! a track-listing poster beautifully designed by none other than Pam Berry, who's played such an important part in making the regular EP covers so lovely: PLUS! a selection of Hangover Lounge badges Under the felt you'll find three beautiful pieces of vinyl, the three EPs themselves, of which we are all very proud. And, y'know, it's all about the music, man. 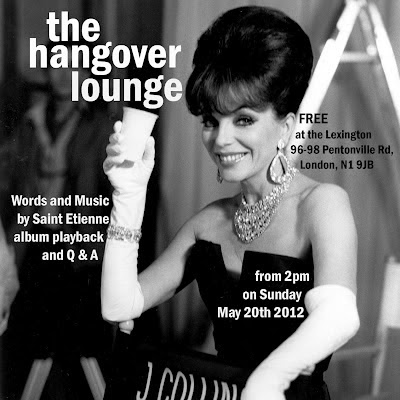 Saint Etienne's long-awaited eighth album is out on Monday May 21. You can hear the words and music a day earlier when we have a playback and then a Q&A when you can ask Bob, Pete and Sarah some questions.
You probably already know that Words and Music By Saint Etienne is about:
• how music affects your life
• how it defines the way you see the world as a child
• how it can get you through bad times in unexpected ways
• how songs you’ve known all your life can suddenly develop a new attachment and hurt every time you hear them.
This Sunday you can put your hands in the air and ask them more about their new album, and anything else you fancy.
Playback: 2.30pm
Q&A: 3.30pm
Posted by Ben at Monday, May 14, 2012 1 comment:

Coming Up in MAY!

This is the first of what will be - If we can summon up the self-discipline and the inclination - a monthly update of what's coming up at the Hangover Lounge month by month, with a side order of Sunday goodies at the Lexington more generally, when we know. You may or may not have noticed but next month is the month of May, so that seems like the correct month to tell you about.

May 6: it's a big day for us - it's our second Grant McLennan tribute day, with a stellar cast of musicians playing live, plus Djs from Second Language records guesting on the decks. More details about what's going on here. What's more the next day's a very special Bank Holiday - up the workers and up the Fortuna Pop live most-of-the-dayer featuring a ton of good stuff. It'd be rude not to be at both, really.

May 13: A selection of top guests today, including ace music writers Dorian Lynskey and Mark Sinker, plus a special guest to be announced. If we remember. And upstairs there's one of those awesome Wills and Moody jumble sales.

May 19: It's a Saturday, and Saturdays are days for working up hangovers, not working them off. But at least one, and maybe more than one, HL person will be visible at the Independent Label Market at Spitalfields Market. There's every chance of spotting someone at Mason and Taylor afterwards, too. BEER. You may be interested to hear that we're working on a very special, super-limited edition of the The Hangover Lounge EPs for sale on the day, but there'll be more blogging about that before it all happens.

May 20: One day we'll all have listings in the IMDB, but our guest on the 20th will be filmmaker and good egg Giles Borg , should be a fascinating listen. Do yourself a favour and watch this: http://wn.com/heavenly__space_manatee

May 27: HAPPY BIRTHDAY TO US!!! It's our fourth birthday, and we are celebrating by having ALL (or possibly NEARLY ALL) of Allo Darlin' and the Wave Pictures plaing DJ sets. I have a feeling this might be carnage but it should be entertaining carnage. Expect the usual freebies, which may or may not include special edition beermats and delicious cakes. Soon it'll be June, but there's a lot of May to enjoy first.
Posted by Tim at Wednesday, May 02, 2012 1 comment: