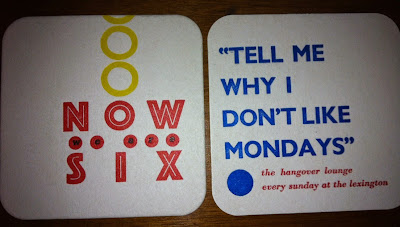 Today we are 6 years old. Come along and enjoy a pint, some fine tunes and grab a birthday beer mat, designed and printed by Tim. There are some free compilation CDs, too. Join us from 2pm.

Between now and then, reminisce about 5 gigs we can't quite believe we put on (originally printed in our 5th birthday fanzine, May 2013).

Withered Hand and Pam Berry, February 16 2013
September 2012, Dan Willson is touring on a budget and looking for a place to crash after his gig supporting Frightened Rabbit. Ben’s sofa bed is offered and accepted. Talk turns to Dan’s love of Black Tambourine and how he’d love to work with Pam Berry. Ben texts Pam, who immediately responds with “I would totally love to”. Practices ensue, new songs are written and they play to 550 people at the Union Chapel. It’s wonderful. They record one of those new songs for a forthcoming Hangover Lounge picture disc.

Grant McLennan tribute gig, May 5 2013
Robert Forster turns up to watch David Westlake, Elizabeth Morris and The Mexican Postcards at our third annual McLennan tribute gig. He played in Barcelona the night before and has had only an hour’s sleep: “I don’t know if this expression still exists, but I did an all-nighter. I’m not on drugs.” After the acts, Forster takes to the stage and plays I’m Alright and Darlinghurst Nights: “I’m honoured to be here today.” The feeling is mutual.

Darren Hayman, 1 January 2012
Darren helps everyone start the year on the good foot. Hangovers are cured, clouds are parted and resolutions quickly forgotten. The crowd bellow along to “We’re Tired Of Being Dicked Around”. Life seems ok.

Birdie, 15 November 2009
Paul Kelly and Debsey Wykes tried “very hard not to sound like other groups”. The record-buying public decided that Birdie wouldn’t be their main source of income. They had a family to raise, films to make and touring with Saint Etienne to worry about. Admirable stuff, but we decided that their work wasn’t yet done. Thankfully they agreed.

Allo Darlin and The Wave Pictures, 27 May 2012
Both bands were having so much fun on their European tour that they asked us one Thursday if they could continue straight after their return on the Sunday. Only a fool would say no. We are not fools. The bands are obviously having so much fun playing. So, too, is the audience.
Posted by Ben at Sunday, May 25, 2014 1 comment:

The History of the Hangover Lounge 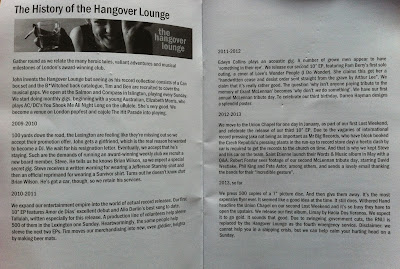 The Hangover Lounge turns 6 this Sunday, May 25. Last year we put on a gig - Birdie, Amor de Dias and Hacia Dos Veranos - and gave away a glossy fanzine. That zine contains a history of the Hangover Lounge's first 5 years. There have been many great events in the last year, but settle back and read about the first 5 years.

Oh, and come along this Sunday. It'll be great to see you relaxing as always.


Gather round as we relate the many heroic tales, valiant adventures and musical milestones of London’s award-winning club.

2008-2009
John invents the Hangover Lounge but seeing as his record collection consists of a Can box set and the B*Witched back catalogue, Tim and Ben are recruited to cover the musical gaps. We open at the Salmon and Compass in Islington, playing every Sunday. We start doing monthly gigs, beginning with a young Australian, Elizabeth Morris, who plays AC/DC’s You Shook Me All Night Long on the ukulele. She’s very good. We become a venue on London popfest and cajole The Hit Parade into playing.

2009-2010
100 yards down the road, the Lexington are feeling like they’re missing out so we accept their promotion offer. John gets a girlfriend, which is the real reason he wanted to become a DJ. We wait for his resignation letter. Eventually, we accept that he’s staying. Such are the demands of running an award-winning weekly club we recruit a new board member, Steve. He tells us he knows Brian Wilson, so we expect a special secret gig. Steve receives a written warning for wearing a Jefferson Starship shirt and then an official reprimand for wearing a Survivor shirt. Turns out he doesn’t know that Brian Wilson. He’s got a car, though, so we retain his services.

2010-2011
We expand our entertainment empire into the world of actual record releases. Our first 10” EP features Amor de Dias’ excellent debut and Allo Darlin’s best song to date, Tallulah, written especially for this release. A production line of volunteers help sleeve 500 of them in the Lexington one Sunday. Heartwarmingly, the same people help sleeve the next two EPs. Tim moves our merchandising into new, even giddier, heights by making beer mats.

2011-2012
Edwyn Collins plays an acoustic gig. A number of grown men appear to have ‘something in their eye’. We release our second 10” EP, featuring Pam Berry’s first solo outing, a cover of Love’s Wonder People (I Do Wonder). She claims this got her a “handwritten cease and desist order sent straight from the grave by Arthur Lee”. We claim that it’s really rather good. The question ‘why isn’t anyone paying tribute to the memory of Grant McLennan’ becomes ‘why don’t we do something’. We have our first annual McLennan tribute day. To celebrate our third birthday, Darren Hayman designs a splendid poster.

2012-2013
We move to the Union Chapel for one day in January, as part of our first Lost Weekend, and celebrate the release of our third 10” EP. Due to the vagaries of international record pressing (aka not being as important as Mr Big Records, who have block booked the Czech Republic’s pressing plants in the run-up to record store day) a hectic dash by car is required to get the records to the church on time. And that is why we kept Steve and his car on the team. Saint Etienne launch their Words & Music album in May with a Q&A. Robert Forster sees footage of our second McLennan tribute day, starring David Westlake, Phil King and Pete Astor, among others, and sends a lovely email thanking the bands for their “incredible gesture”.

2013
We press 500 copies of a 7” picture disc. And then give them away. It’s the most expensive flyer ever. It seemed like a good idea at the time. It still does. Withered Hand headline the Union Chapel on our second Lost Weekend and it’s so busy they have to open the upstairs. We release our first album, Limay by Hacia Dos Veranos. We expect it to go gold. It sounds that good. Due to swingeing government cuts, the RNLI is replaced by the Hangover Lounge as the fourth emergency service.

Disclaimer: we cannot help you in a shipping crisis, but we can help calm your hurting head on a Sunday.

Thanks to Luke Haines, David Westlake and Heathers' Michael Avishay for reminding us, again, what brilliant songs Grant McLennan wrote and what wonderful musicians he inspired.

We'll start with Luke and David playing together for the first time in 23 years.

Luke played The Monkees' Pleasant Valley Sunday in recognition of Grant's Monkees devotion, then played Don't Let Him Come Back.

Michael played a new song inspired by The Go-Betweens, an inspired version of Streets Of Your Town, and Cattle and Cane (last year on hearing Elizabeth Morris was going to play Cattle and Cane, Robert Forster remarked "that is a brave choice").