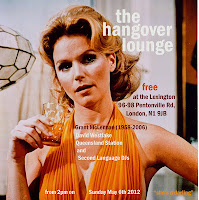 We'll be marking the sixth anniversary of the death of one our favourite songwriters, Grant McLennan, on May 6. After our first McLennan tribute gig last year, a few musicians put their hands in the air and said they'd love to do something next time. Greater interest from others followed.
Queensland Station
Featuring Pete Astor of indie legends The Loft and The Weather Prophets, Phil King (Jesus and Mary Chain, Lush) and Ben Phillipson (Eighteenth Day Of May, Comet Gain).
Pete Astor, who knew Grant in the 1980s when they were both musicians on the London indie scene, said: “Grant McLennan was a lovely person, who also wrote brilliant songs. He always carried himself with dignity and poise and I’m very grateful to have had the chance to have spent time with him, as well as learn about music from a great songwriter. He was also always a pleasure to get drunk with.”
David Westlake
What a coup! David worked with The Go-Betweens in his first band, The Servants. After The Servants supported The Go-Betweens on tour, that band’s Robert Forster, Robert Vickers and Amanda Brown joined David Westlake to record a BBC radio session for the Janice Long show in 1987. Amanda Brown played violin on The Servants’ seminal single The Sun, A Small Star.
Guest DJs
Glen and David from the beautifully boutique Second Language record label will be doing a spot on the decks. David will also be joining Queensland Station to keep the Lindy Morrison beat.
Hangover Lounge 2-9pm
David Westlake 3.30pm
Queensland Station 4.15pm
Posted by Ben at Saturday, April 14, 2012